Gremlin is a simple, safe and secure service for performing Chaos Engineering experiments through a SaaS-based platform. Puppet is a tool for managing the desired state of hosts. Puppet works using a client server model, with a Puppet agent installed on each host, and a process called the puppetserver that tells the hosts what their state should look like. There’s an open source version of Puppet that you can use for free, and a commercial version called Puppet Enterprise (PE). We’re going to look at Puppet Enterprise as it’s a self-contained, complex system, and offers the possibilities for some very interesting testing.

Puppet Enterprise includes many services, some of which are dependent on each other. We’re going to use Gremlin’s process killer to kill some specific services, and observe how the client behaves with them down. In the first case we expect to see connection failures. The second failed service will be a database, and it may produce a more interesting results.

To complete this tutorial you will need:

This tutorial will walk you through the required steps to run the Puppet Enterprise Chaos Engineering experiments.

You can provision the CentOS 7 host using any cloud provider or provisioning tools you’re comfortable with. Puppet recommends that the host for small Proof Of Concept environments have 2 cores, at least 6G RAM, and 20G of available disk in /opt. If you’re using AWS, the recommended ec2 host is m5.large.

Copy the tarball to your CentOS 7 host and run the installer. Substitute your actual username and hostname/IP in the following commands.

Select 1 for the text mode install. This will open up the installer configuration file (pe.conf) in your default text editor. The only thing you need to change in the file is to set a password for logging into the Puppet Enterprise console (the web UI). Look for this line in the text:

Save and exit the file. Select Y to continue with the installation, and the installer will run to completion.

The last step is to run the Puppet agent twice. Puppet Enterprise manages the Puppet master host itself, and this will put in place the last bits of configuration needed. You can run the agent from the command line with this command:

You might see a lot of output the first run. The output should end with a line like:

Run the agent at least one more time. You want to get to the point where the agent is no longer making changes, which means the host is in the desired state. The output from that agent run will look something like this:

Puppet has applied the catalog (the desired configuration state), but no changes were necessary. This means we have the host in the right state.

Install Gremlin using our guide for installing on CentOS 7.

Puppet agent - This is the client process that runs on each host. The agent gathers up info about the host, sends it to the server, and then executes whatever commands are needed to bring the host into the desired state.

Puppet Server - This is the server process that runs on one or more hosts. It takes the information it receives about each host from their agents, and evaluates the Puppet code to determine what the state of the host should be (this is referred to in Puppet speak as compiling the catalog). It uses Jruby and runs in a JVM.

Puppet DB - This process is used to write down different kinds of data about what’s happening in the Puppet Enterprise ecosystem, like reports about what happened when a Puppet agent ran. It can also be used to do service discovery. For example, you can export a list of web hosts, and have Puppet include them automatically when it configures their load balancer. PuppetDB is written in Clojure, and is backed by a PostgreSQL database.

We will use the Gremlin web app to kill the puppetserver process, and then observe the results. The purpose of the experiment is to see how the Puppet agent responds when the server is unavailable. 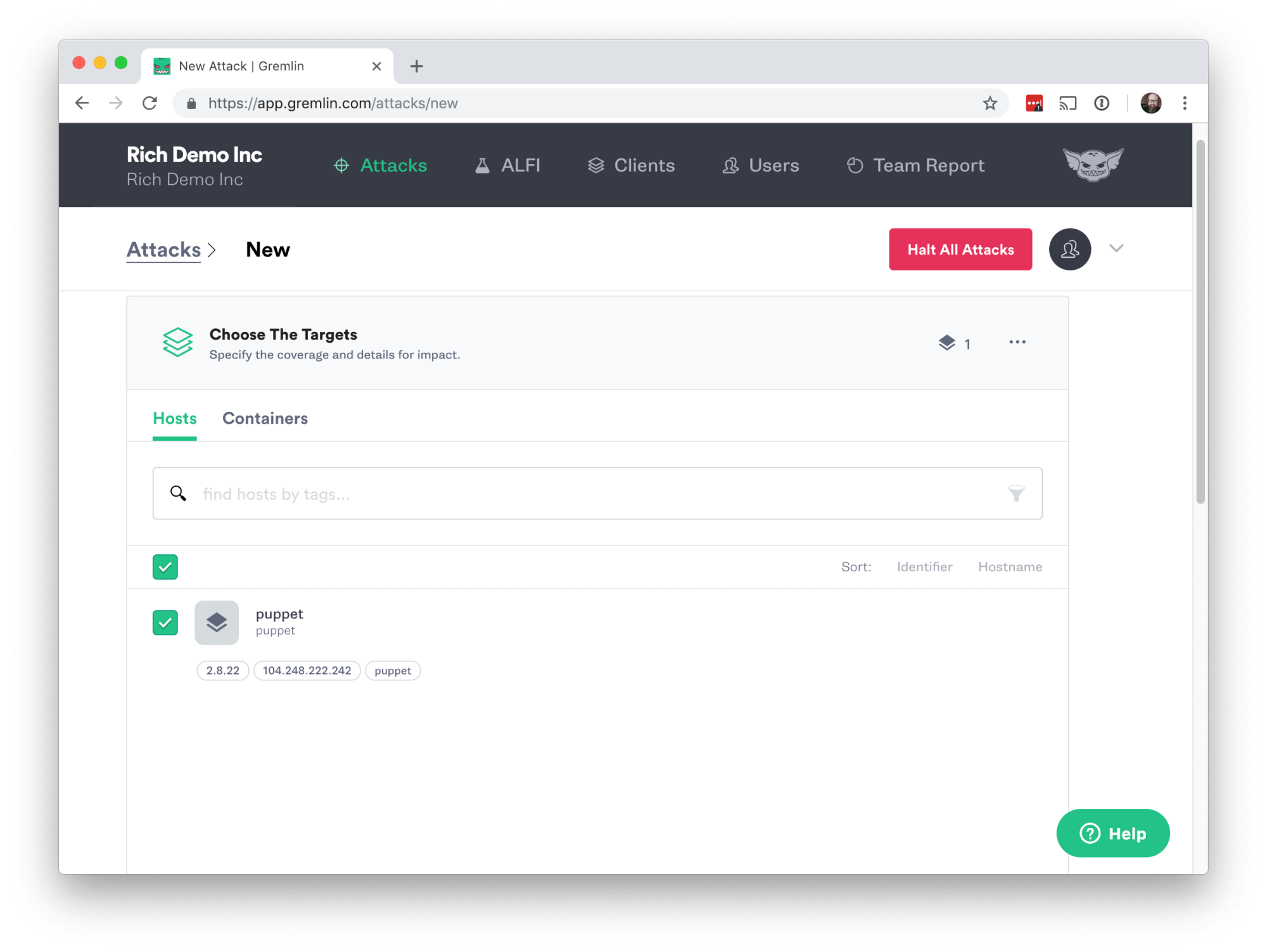 Next scroll down to Choose a Gremlin, click on State and then Process Killer. 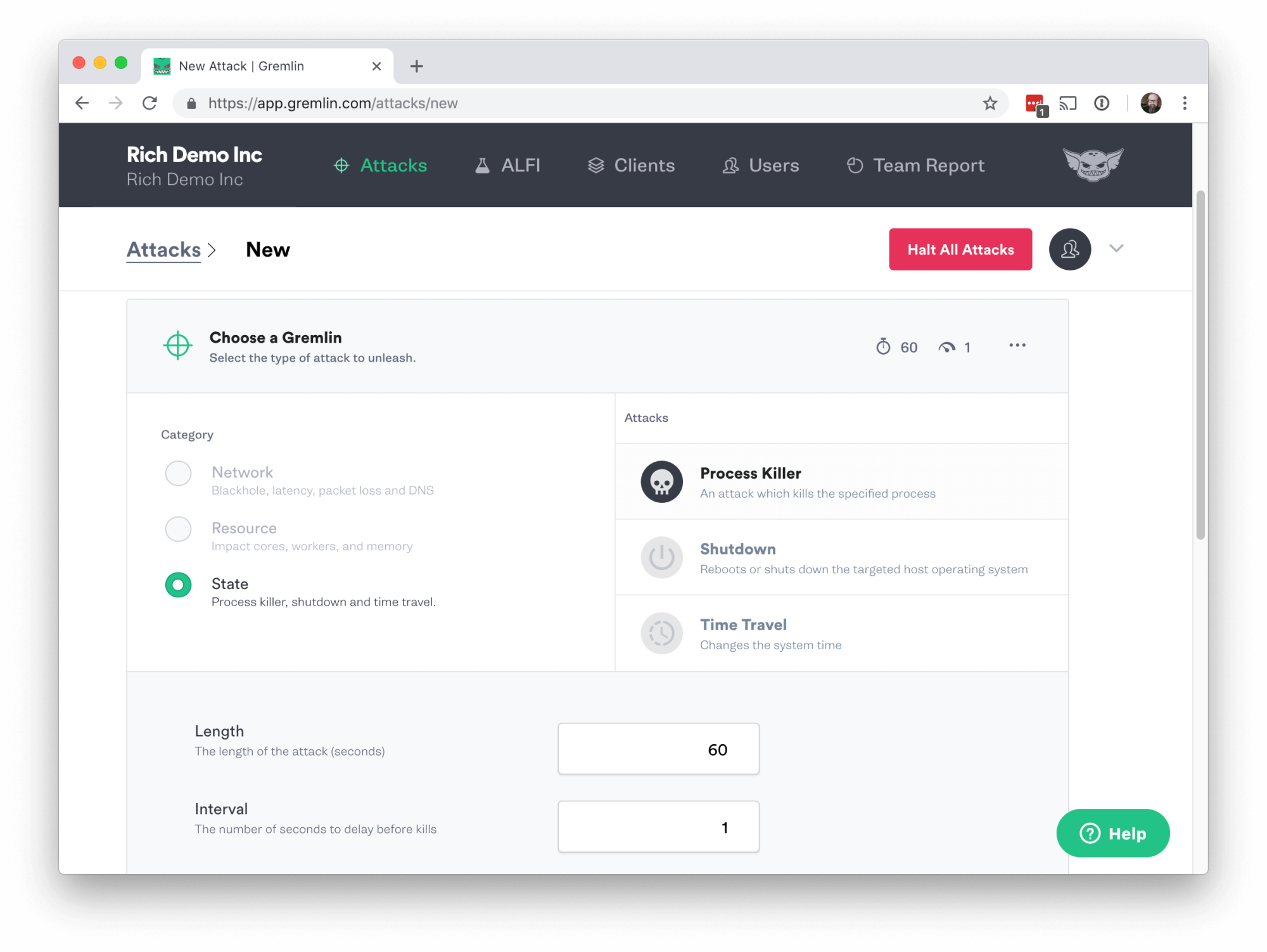 Scroll down in the attack setting until you see Process. 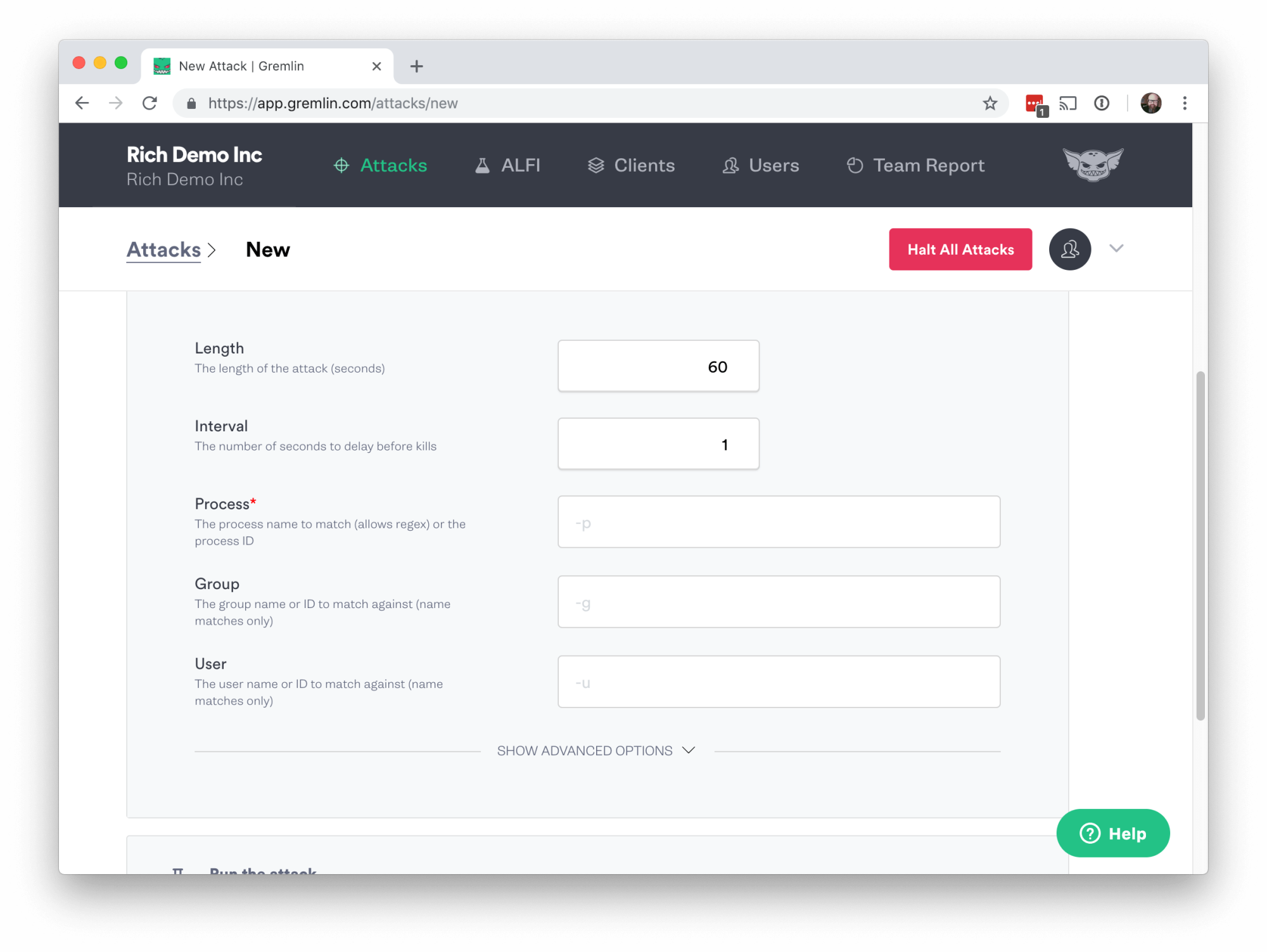 The Process Killer attack allows you to specify either the process name, or the process ID (PID). We’ll use the PID for this first experiment.

To find the PID of the Puppet Server, go back to the command line on the server and run:

The output will display info for the puppetserver process including the PID. Enter the PID in the Process Killer attack settings, and click Unleash Gremlin in the bottom left.

After the attack completes, go back to your shell on the host and run the Puppet agent by hand again.

We expected to see some sort of error like “connection refused” if the Puppet Server process was killed, but what you should see is an agent run with no changes applied:

So what happened? We killed the process but it’s still running. At the terminal, run the command again to find the PID:

You should see a puppetserver process running, but with a new PID. Gremlin did kill the process but CentOS 7 uses systemd, and the puppetserver process is configured to restart if it dies. This is a great result. We broke something in the Puppet Enterprise system, and the system corrected it without our intervention.

Even though we’ve discovered that systemd will restart this process if it dies, it’s a common practice to run multiple puppetserver processes behind a load balancer for increased reliability and scaling.

As we discussed earlier, the PuppetDB service is backed by a Postgres database. It’s likely that if we kill the PuppetDB process itself that systemd will restart it, as we saw in the first experiment. But what happens if we kill the database itself?

In the Gremlin UI click on Create Attack, and then on State and Process Killer like we did before. This time instead of using the PID for the Postgres database, we’ll kill it by name. Enter postgres for the process: 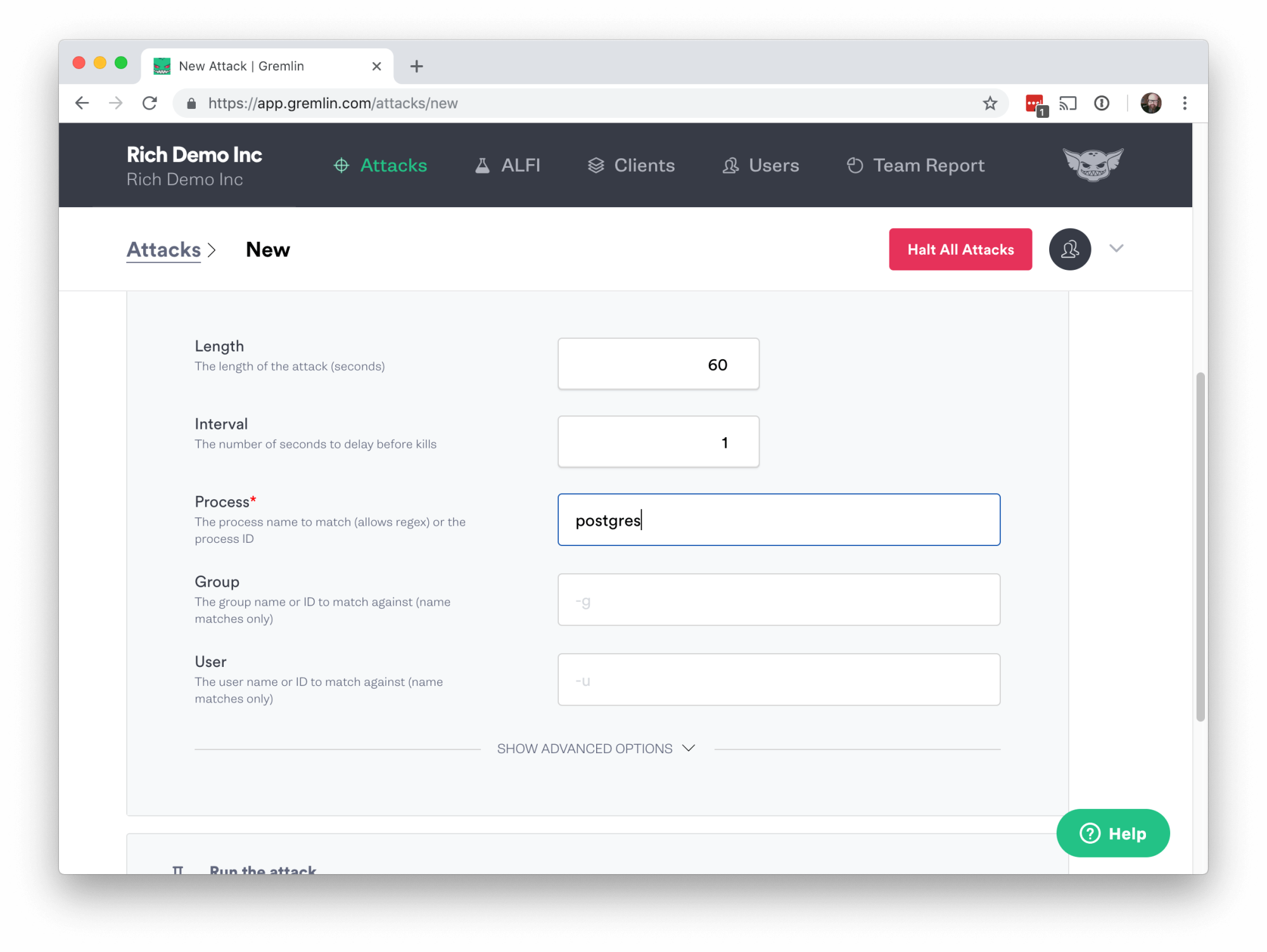 Click Unleash Gremlin and wait for the attack to complete. Then click on the attack in the completed list and you can see more details about it. Under Executions you’ll see an arrow pointing down, on the right side of the screen. Click that to expand the details and you’ll see the log for the attack. 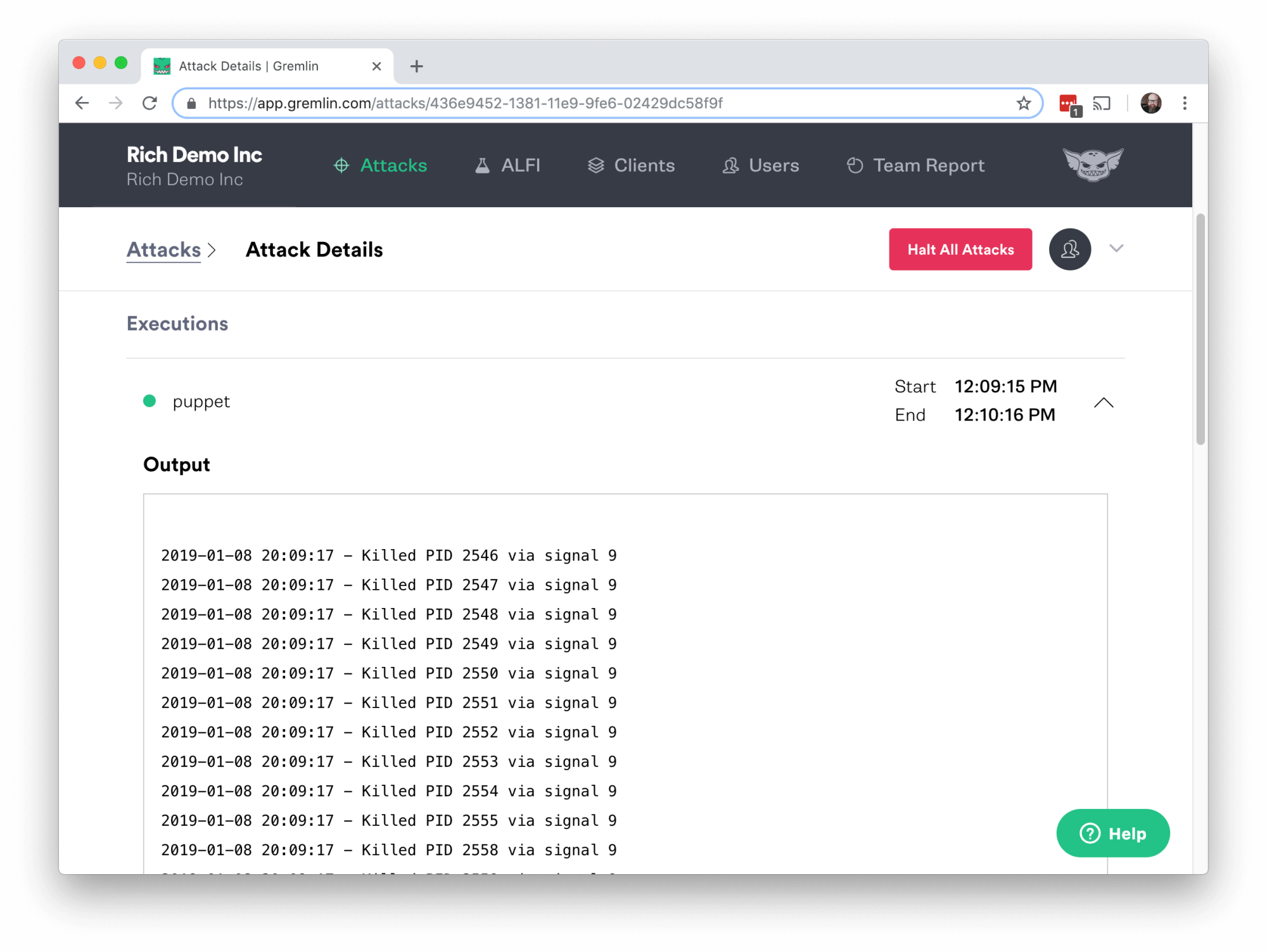 Now go back to your shell on the host and run the Puppet agent again with that same command:

This time the output you get should look very different.

The Postgres database has been killed, and without it running the Puppet Agent gets a 500 error.

You’ll also see problems if you log into the Puppet Enterprise web UI (the PE console), which should be running on your host on port 443.

Try to log into Puppet Enterprise console with the username “admin” and the password you set during the PE install. The login attempt should fail. 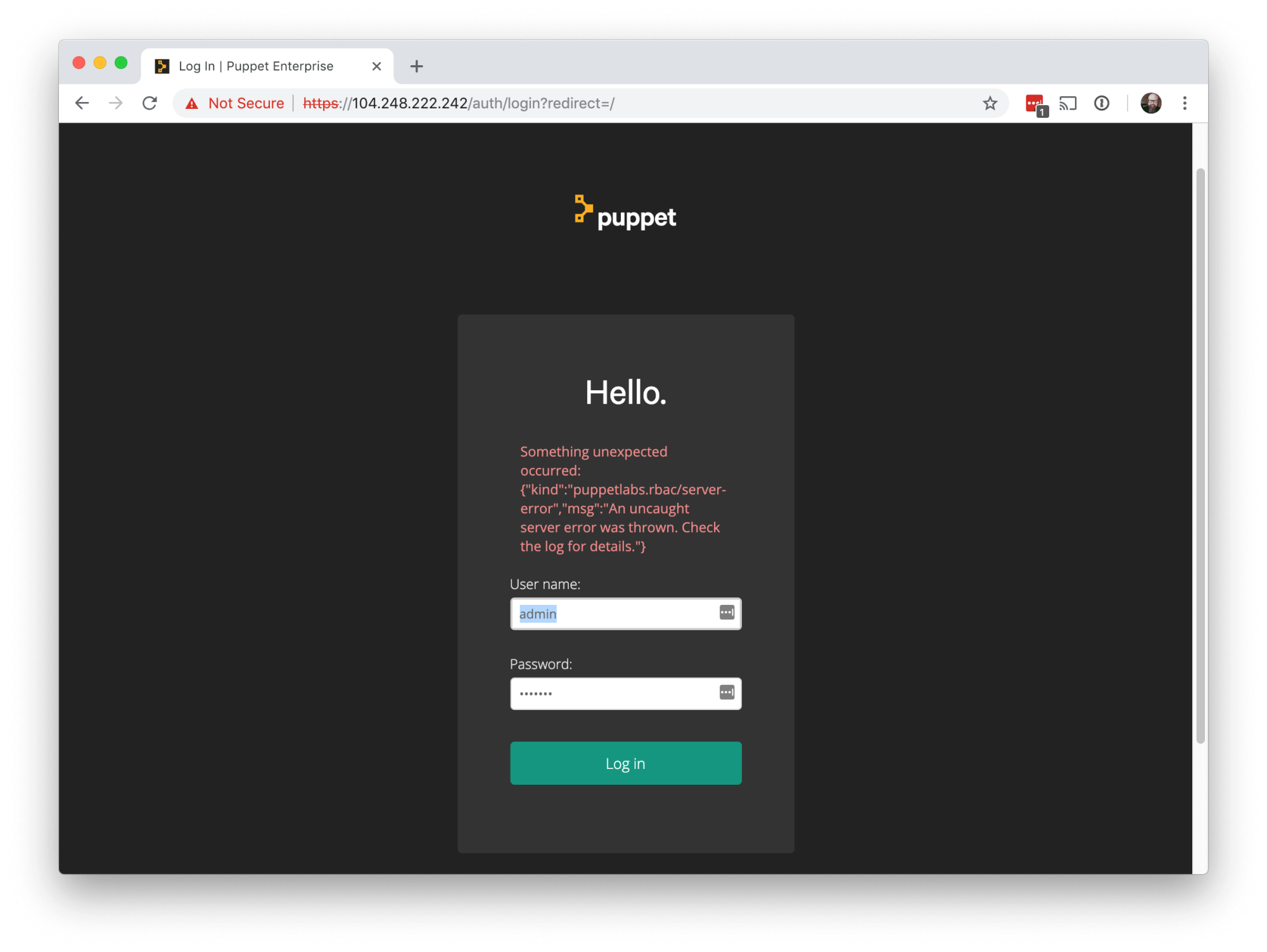 You may receive a different error message depending on the state of your system. If you were already logged into the console, you’ll see a red error screen.

In this second experiment we’ve found that we can kill the Postgres database, and that it does not restart automatically. That’s almost certainly by design, as a failed database is a situation where you likely want human intervention. But that failure does leave the system in a very unusable state.

This tutorial has explored how to perform Chaos Engineering experiments on Puppet Enterprise using Gremlin. We discovered some things about how resilient the Puppet Enterprise system is, and some ways to improve its resiliency.

Tutorial: Getting Started with Chaos Engineering 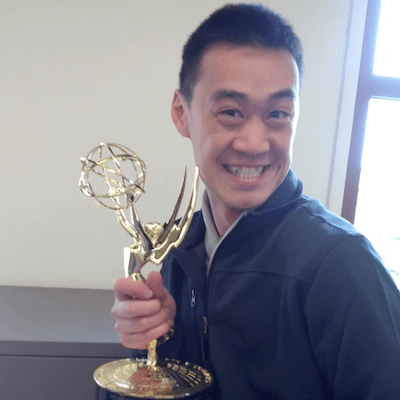 4 Chaos Experiments to Start With

Automation is a must when operating and scaling cloud-based systems. The more servers and services there are to manage… 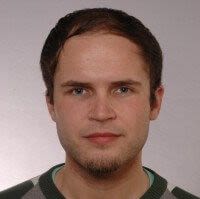