Avoid downtime. Use Gremlin to turn failure into resilience.
Get started
Fault Injection

An attack is a method of injecting failure into a system in a simple, safe, and secure way. Gremlin provides a range of attacks which you can run against your infrastructure. This includes impacting system resources, delaying or dropping network traffic, shutting down hosts, and more. In addition to running onetime attacks, you can also schedule regular or recurring attacks, create attack templates, and view attack reports.

Each attack, or "Gremlin", tests your resilience in a different way.

Resource Gremlins are a great starting point -- simple to run and understand. They reveal how your service degrades when starved of CPU, memory, IO, or disk space.

State Gremlins introduce chaos into your infrastructure so that you can observe how well your service handles it, or if it fails.

Network Gremlins show you the impact of lost or delayed traffic to your application. Test how your service behaves when you are unable to reach one of your dependencies, internal or external. Limit the impact to only the traffic you want to test by specifying ports, hostnames, and IP addresses.

You can use tags to target IP addresses where traffic should be impacted during network attacks. This is important for today's ephemeral environments where hosts live for a short time and have dynamic IP addresses. As custom tags are used to indicate where an attack should run, the same tags can be used to indicate the hosts to which network traffic should be impacted. For example, to test latency between serviceA and serviceB, select all clients with the tag service:serviceA when choosing the Hosts to target, and select the tag service:serviceB when configuring the Network Gremlin.

Limit the blast radius of a network attack to specific external service providers. Select one or many AWS services and their associated region to impact. The destination network configuration is automatically updated daily using an AWS discovery service.

Every Attack in Gremlin is composed of one or more Executions, where each Execution is an instance of the attack running on a specific target.

You can see Stages ordered by their importance in the following section.

Attacks can be run ad-hoc or scheduled, from the Web App or programmatically. You can schedule attacks to execute on certain days and within a specified time window. You can also set the maximum number of attacks a schedule can generate.

Gremlin allows targeting objects within your Kubernetes clusters. After selecting a cluster, you can filter the visible set of objects by selecting a namespace. Select any of your Deployments, ReplicaSets, StatefulSets, DaemonSets, or Pods. When one object is selected, all child objects will also be targeted. For example, when selecting a DaemonSet, all of the pods within will be selected.

Only parent Kubernetes objects are available to target. Pods will be listed only if they don't belong to a Set or Deployment.

For State and Resource attack types, you can target all, any, or specific containers within a selected pod. Once you select your targets, these options will be available under Choose a Gremlin on the Attack page. Selecting Any will target a single container within each pod at runtime. If you've selected more than one target (for example, Deployment), you can select from a list of common containers across all of these targets. When you run the attack, the underlying containers within the objects selected will be impacted. 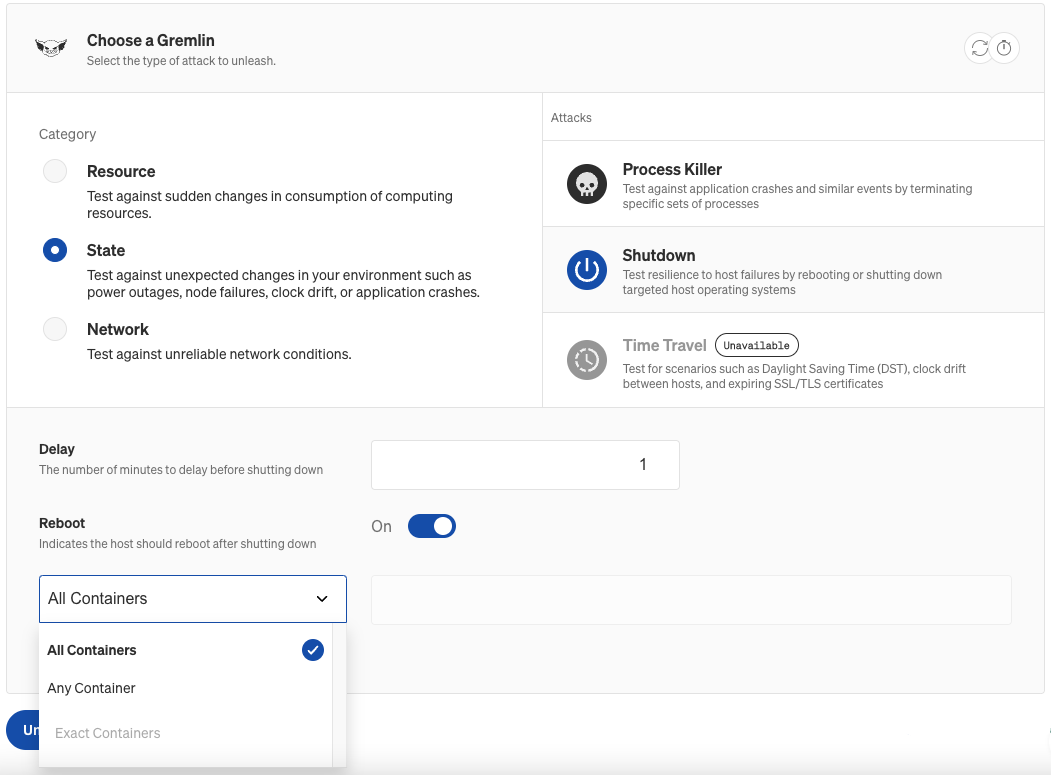 Containers share resources with their hosts. Running resource attacks on Kubernetes objects will impact the hosts where the targeted containers are running, including the host's full set of containers.

Targeted containers also need to be able to resolve api.gremlin.com, otherwise the attack will fail. Gremlin adopts all the configuration and resources of the pod it is attacking.

Company Admins and Owners can turn this feature on for their company by visiting the Company Settings, clicking Settings, and toggling Attack Visualizations on. Only data relevant to the attack is collected and no data is collected when attacks are not running.

Overriding Attack Visualizations for a host

Port and address options can be used multiple times in a single command.

Alternatively, a , can also be used to specify multiple values.

A ^ can be used before a port or address to exclude that argument from the set of impacted network targets.

If only exclude rules are supplied, all other traffic is impacted.
bash

This can be particularly useful for excluding a specific IP from a range that is otherwise impacted by the attack.